The energy discussed in the previous introductory lecture was an energy related to constant force acting on an object. In this lecture we will address a more difficult case of a variable force of a spring acting horizontally on an object according to the Hooke's Law.
Let's remind the Hooke's Law. It states that the force of a spring, fixed on one end, onto a point-object attached to its free end is proportional to the length the spring is extended or compressed from its neutral position.
The corresponding formula for the force F of a spring onto an object is
F = −k·L
where L is a displacement of the spring's free end and k is a coefficient of elasticity - a specific characteristic of "stiffness" of each spring.
The minus sign signifies that the direction of the force is opposite to a displacement. The frame of reference is associated with the neutral position of a spring and the X-axis is directed towards spring's stretching. Then, for positive displacement L(stretching) the force is directed towards neutral point (that is, negative), while for negative displacement (compression) the force also directed towards a neutral position, (that is, positive).

At this point we recommend to refresh the material in the "Work and Elasticity" lecture of the "Mechanical Work" chapter of the "Mechanics" part of this course.
As stated in that lecture, the total amount of work W to compress (or stretch) a spring with elasticity k by length Lequals
W = k·L²/2
regardless of how exactly we compress or stretch a spring.

Assume now that we have compressed a spring by the length L, performing work equaled to W=k·L²/2. At a spring's end we have attached an object of mass m. Then we let the spring go by itself with the object attached to its end.

Intuitively, we think that, at first, the spring should return back to its neutral position. During this time the object's speed will increase because the force of elasticity of a spring will push it.

But then, when a spring reaches its neutral position, the object, having certain speed, will continue its move by inertia, stretching the spring. During this time the force of elasticity of a spring will slow down the movement of the object until it stops at the end of the stretching process.

At that time the force of elasticity will pull the object back to a neutral position, increasing its speed.

At the neutral position object continues moving by inertia, compressing a string, until the force of elasticity stops its movement when the spring will be in the compressed position, as in the beginning of our process.

At this point the process repeats itself and can continue like this indefinitely.

Well, our intuition is correct, a spring with an object attached to it will oscillate indefinitely. Let's analyze quantitatively these oscillations.

Our first goal is to find the dependency of the object's position on time. This can be done using the Newton's Second Law, taking into account the initial position of the object at the end of a compressed spring with no initial speed.
Let S(t) be a function describing the position of the object at the end of a spring relatively to its neutral position with stretching being a positive direction. Then S(0)=−L and S'(0)=0. The acceleration is the second derivative of S(t), that is  The force of elasticity is proportional to S(t) as F=−k·S(t). Now the Newton's Second Law F=m·a looks like this differential equation:
−k·S(t) = m·S"(d)
with two initial conditions:
S(0) = −L
S'(0) = 0
This differential equation is fully solvable and its general solution is
x(t) = C1·cos(t·√k/m) +
+ C2·sin(t·√k/m)

Let's calculate the work that spring performs during the first quarter of its period from complete compression to a neutral point by accelerating the object from initial speed V(0)=0to its maximum at a spring's neutral position V(T/4).
It can be done by two methods.

What we have proven now is that the same amount of work done to compress a spring (W=k·L²/2) is performed by a spring when it returns to its neutral position.

That's why we say that the spring accumulates potential energy, when it's compressed, and releases it, when it returns back to neutral position.

As we see, the full energyremains constant, it does not depend on the attached object's mass, only on the properties of the spring - coefficient of elasticity k and its initial displacement from the neutral position.
Posted by Unizor at 8:57 PM No comments:

Potential energy is a quantitative characteristic of an object's position relative to other objects or environment that are a source of some forces. These forces would result in motion of the object under consideration (if no counteracting forces present) and, therefore, would result in performing certain work related to this motion.

Typical example of potential energy is related to a position of some object in the gravitational field.
Since a planet Earth attracts all objects, an object raised to a certain height above the ground will fall, if no support is provided. The motion of falling object is the result of work of the forces of gravity. Therefore, by definition, an object raised above the ground has certain amount of potential energyequal to work performed by the forces of gravity to move it down to the ground.

In a simplified case of a small object of mass m, raised on small (relatively to the size of the Earth) height h, the force of gravity, acting on this object, is constant and is equal to the object's weight , where  is the acceleration of the free fall near the Earth's surface.
If no support is provided, the object will fall straight down. Thus, the constant force of gravity P would perform work, pushing the object down at a distance h, thus performing work
W = P·h = m·g·h

Let's examine the relationship between an object's potential energy and its kinetic energy as it falls down from certain initial height.
Assume an inertial frame of reference associated with Earth and X-coordinate directed straight up perpendicularly to the ground with ground level be at coordinate X=0.
Initial position of the object is, therefore, at X-coordinate equal to X=h. The falling object moves with constant acceleration −g (negative, since it moves from positive X=h to X=0). Initial speed of the object is zero.
Therefore, the time-dependent motion X(t) can be described by the kinematic equation
X(t) = h − g·t²/2
The object's velocity is directed vertically down and, as a function of time, is the first derivative of the X(t):
V(t) = X'(t) = −g·t
(which is obvious from the fact that the motion is with constant acceleration −g and zero initial speed)

As object falls down, its height diminishes, which means that its potential energy also diminishes. At any given moment of time t this energy equals to
Epot(t) = m·g·X(t) = m·g·(h−g·t²/2)

At the same time the kinetic energy of the object is increasing, since its speed V(t)is increasing. At any given moment of time t this energy equals to
Ekin(t) = m·V²(t)/2 = m·g²·t²/2

The total time in motion from the initial position above the ground at height h to the ground can be obtained by resolving the equation X(t)=0 for variable t:
X(t) = h − g·t²/2 = 0
tfall = √2h/g
At that time of touching the ground the potential energy of an object equals to zero and its kinetic energy equals to
Ekin(tfall) = m·V²(tfall)/2 = m·g²t²fall/2 = m·g·h

A car engine accelerates a car of mass m from the state at rest to some maximum speed during the time T with constant acceleration a along a straight line.
Ignore loss of mass due to burning fuel.
What is the kinetic energy Ekinof a car at the end of this period of acceleration and what is the work W performed by the car engine during this time?

A driver of a car, going with speed V, sees an obstacle and strongly presses on breaks, so its wheels stop spinning. The car slows down to complete stop by the force of friction only at a distance S from the spot when it started to break.
What is the coefficient of kinetic friction μ of car's wheels against the ground?
Assume, the free fall acceleration is g. 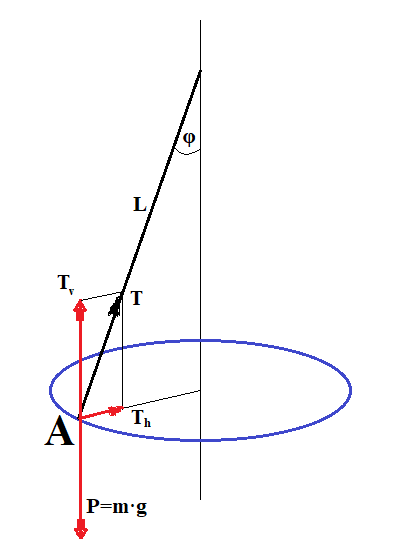 A point-object A of mass m is freely rotating on a thread of a length L that forms an angle φwith vertical.
What is its kinetic energy?

T is a force of tension of the thread. We can represent it as a sum of two components - Tvthat balances the weight P and Th that keeps an object on a circular trajectory (centripetal force).
Tv = m·g
Th = Tv·tan(φ) = m·g·tan(φ)
This centripetal force causes centripetal acceleration
a = V²/R
(see a chapter Mechanics - Superposition of Forces - Resultant Forces - Example 2 in this course)
where V is a linear speed of an object and R is a radius of a circular trajectory, which is equal to L·sin(φ).
Therefore,
Th = m·a = m·V²/R
Hence,
m·g·tan(φ) = m·V²/R
Kinetic energy is
E = m·V²/2 =
= m·g·tan(φ)·R/2 =
= m·g·L·tan(φ)·sin(φ)/2

We recommend to refresh the properties of a pendulum in the "Mechanics" part of this course in the chapter "Pendulum, Spring".
Let's find the period of oscillations.
Since function y=cos(x) has a period 2π, function y=cos(k·x)has period 2π/k.
In our case the period of oscillation T is equal to
T = 2π·√L/g
The angular velocity is a derivative of the angle of deviation φ(t):
ω(t) = dφ(t)/dt =
= −φ0·√g/L ·sin(√g/L ·t)
At the lowest point of a trajectory the time equals to 1/4 of a period.
Therefore, we can calculate the angular velocity at this point by substituting
t = T/4 = (1/4)·2π·√L/g =
= (π/2)·√L/g
which gives the angular speed at this point as
ω(T/4) =
= −φ0·√g/L ·sin(√g/L ·T/4) =
= −φ0·√g/L ·
·sin(√g/L ·(π/2)·√L/g ) =
= −φ0·√g/L
The linear speed of a rotating object equals to its angular speed, multiplied by a radius.
Therefore, linear speed V at the lowest point equals to
V = L·ω(T/4) =
= −φ0·√g·L
The kinetic energy at this point is
E = m·V²/2 = m·g·L·φ0²/2
IMPORTANT NOTE:
The following equation for small harmonic oscillation used in this problem
φ(t) = φ0·cos(√g/L ·t)
was obtained in "Mechanics" part of this course in chapter "Pendulum, Spring" by simplification of the differential equation that described the motion of the pendulum. In particular, it was assumed that for small oscillations the angle of deviation from the vertical φand its sine sin(φ) are approximately equal. The exact value of the kinetic energy of a pendulum at its lowest point can be derived using its potential energy at the top position, which we will address in the next chapter, and which is equal to 2m·g·L·sin²(φ0/2). If in this expression we replace sin(φ0)with φ0 (which is acceptable for small angles), we will get the formula for kinetic energy we obtained above.
Posted by Unizor at 12:39 PM No comments: