Determine the potential of the gravitational field of an infinitely thin solid rod at any point outside of it.

Let's establish a system of coordinates with a rod and a point mass lying in the XY-plane with the rod on the X-axis with one end at point A(a,0) and another at point B(b,0).
Assume that the rod's length is L=b−a and the mass is M, so the density of mass per unit of length is ρ=M/L.
Assume further that the coordinates of a point P, where we want to calculate the gravitational potential, are (p,q).

Since the mass in our case is distributed along the rod, the gravitational potential will be different.

Consider a picture below (we recommend to save it locally to see in the bigger format). 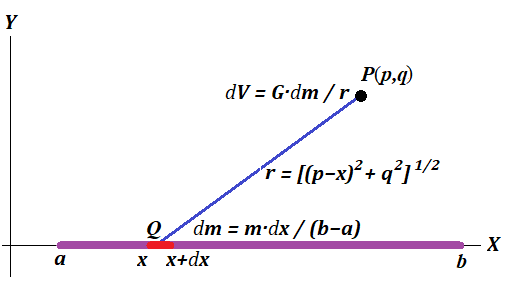 The infinitesimal segment of a rod dx, positioned around a point Q(x,0), has an infinitesimal mass dm that can be calculated based on the total mass of a rod M and its length L=b−a as
dm = M·dx /L

While moving an object from a distance r1 to a distance r2 from the center of gravity, the gravitational field has performed certain work W[r1,r2], spending certain amount of energy. Since energy must be conserved, it should materialize in some other way.

Indeed, the kinetic energy of a probe object at the end of its movement from point {r1,0,0} to {r2,0,0} must be equal to the work performed by the field.

In a particular case, when r1=∞ and r2=r, that is a probe object falls with no initial speed from the infinitely long distance from a source of gravity to a point at distance r from it, the formula is simplified:
V²r = 2·G·M /r

We would like to warn against falling into a point-mass that is a source of gravity, when the final distance from it is zero, that is r=0 in the above equation. It obviously produces infinite speed and infinite kinetic energy, which does not correspond to reality. The most important reason for this deviation from the reality is our assumption about a source of gravity to be a point-mass. Real objects have certain non-zero dimensions. For example, in case of a gravitational field around our planet should not be analyzed by this formula for values of r less than the radius of Earth.

Back to energy conservation.
The potential energy of an object is a measure of work that it can do, if left alone, that depends on a position of an object relative to other objects and such properties as its mass. Actually, these two parameters are the only ones needed to calculate the potential energy of a probe object in a gravitational field, provided we know everything about the field.

As we know (see the previous lecture), amount of work we need to move a probe object of mass m from an infinite distance to a distance r from a source of gravity equals to
Wr = −G·M·m /r
It's negative from our external to the gravitational field viewpoint, because we don't actually perform work, the field performs it for us. So, from the external viewpoint, the field gives certain energy to external object by performing some work on it, similar to a person, pushing the cart, spends energy, transferring it to a cart.

This is also the escape speed needed to fly away from Earth's gravitational field.
Posted by Unizor at 1:21 PM No comments:

Problem 1
Gravitational potential of a spherical gravitational field around a point-mass M at a distance r from it is defined as the work performed by gravity to bring a probe object of a unit mass from infinity to this point and is expressed as
Vr = −G·M /r
Why is this formula independent of trajectory of a probe object or its exact final position relative to the point-mass M, but only on a distance itself from the source of gravity?

Solution
Any movement can be represented as infinitely many infinitesimal displacements, combined together into a trajectory.
In our three-dimensional world the force and an infinitesimal displacement of a probe object are vectors, so the infinitesimal work dW performed by the force of gravity F during the movement of a probe object, described by the infinitesimal displacement dS, is a scalar product of these two vectors:
dW = F·dS
Note that the vector of gravitational force F is always directed towards the source of gravity.
Since a displacement vector dS can be represented as a sum of radial (towards the source of gravity) dSr and tangential (perpendicular to radius) dSt components, the above expression for a differential of work can be written as
dW = F·(dSr + dSt) =
= F·dSr + F·dSt
The second component in the above expression is a scalar product of two perpendicular vectors and is equal to zero. That's why we can completely ignore tangential movements, when calculating the work done by a central gravitational field, as not contributing to the amount of work. The total amount of work will be the same as if our probe object moved along a straight line towards the source of gravity and stopped at a distance r from it.

Solution
Let's draw a diagram of this problem (you can download it to display in a bigger format).

Our two point-masses are at points A and B, the probe object is at point D on a perpendicular bisector of a segment AB going through point C.
The force of gravity towards point A is a segment DE, the force of gravity towards point B is a segment DF.
We will calculate the potential of a combined gravitational field of two point-masses at point D, where the probe object is located.
Let's assume that the segment CD equals to h.
The magnitude of each gravitational force equals to
F = G·M·m /(h2+r2)
Represent each of these forces as a sum of two vectors, one (green on a drawing) going vertically along the bisector CD, another (red) going horizontally parallel to AB.
Vertical components of these two forces will add to each other, as equal in magnitude and similarly directed downwards on a drawing, while horizontal ones will cancel each other, as equal in magnitude and opposite in direction to each other. So, the combined force acting on a probe object is a sum of vertical components of gravitational forces with a magnitude
Ftot = 2·G·M·m·sin(φ)/(h2+r2)
Since sin(φ) = CD/AD,
sin(φ) = h /[(h2+r2)1/2]
Ftot = 2·G·M·m·h /(h2+r2)3/2
If the gravitational field pulls a probe object along the perpendicular bisector of a segment AB from infinity to a distance h from the segment, the magnitude of a combined force of gravity, as a function of a distance from the segment x is changing, according to a similar formula:
Ftot(x) = 2·G·M·m·x /(x2+r2)3/2
To calculate work performed by a gravitational field pulling a probe object from infinity to height h above the segment AB, we have to integrate
Wtot = ∫[∞;h]Ftot(x)·dx
It's supposed to be negative, since the direction of a force is opposite to a positive direction of the coordinate axis, we will take it into account later.
Wtot = ∫2GMm·x·dx /(x2+r2)3/2
(within the same limits of integration [∞;h])
This integral can be easily calculated by substituting
y=x2+r2,
2·x·dx = dy,
infinite limit of integration remaining infinite and the x=h limit transforming into y=h2+r2. Now the work expression is
Wtot = ∫G·M·m·y−3/2·dy
with limits from y=∞ to y=h2+r2.
The indefinite integral (anti-derivative) of y−3/2 is −2·y−1/2.
Therefore, the value of integral and the work are
Wtot = −2·G·M·m·(h2+r2)−1/2
For a unit mass m=1 this work is a gravitational potential of a combined gravitational field produced by two point-masses on a distance h from a midpoint between them along a perpendicular bisector
Vtot = −2·G·M·(h2+r2)−1/2
At the same time, the gravitational potential of a field produced by each one of the point-masses, considered separately, equals to
Vsingle = −G·M·(h2+r2)−1/2
As we see, the gravitational potential of two point-masses equals to a sum of gravitational potential of each of them, considered separately.
IMPORTANT NOTE
With more cumbersome calculations this principle can be proven for any two (not necessarily equal) point-masses at any point in space (not necessarily along the perpendicular bisector). This principle means that gravitational potential is additive, that is the gravitational potential of any set of objects at any point in space equals to sum of their individual gravitational potentials.

Problem 3
Express mass M of a spherical planet in terms of its radius R and a free fall acceleration g on its surface.

Problem 4
Express gravitational potential VR of a spherical planet on its surface in terms of its radius R and a free fall acceleration g on its surface.

Solution
From the definition of a gravitational potential on a distance R from a source of gravity
VR = −G·M /R
Using the expression of the planet's mass in terms of its radius R and a free fall acceleration g on its surface (see above),
M = g·R2 /G
Substituting this mass into a formula for potential,
VR = −G·g·R2 /(G·R) = −g·R

Studying forces, we have paid attention to a force of attraction, that exists between any material objects, the force of gravity.
For example, if a comet from outer space flies not far from a Sun, it is attracted by Sun and changes its straight line trajectory.

In Mechanics we used to see the force as something between the objects touching each other, like a man pushing a wagon. In case of gravity the force obviously exists, but it acts on a distance, in "empty" space.
In Physics this concept of force acting on a distance is described by a term field. Basically, field is the area in space where some force acts on all objects or only on objects that have specific property. The force in this case depends on a point in space and an object that experiences this force and, as a result of the action of force, changes its movement.

Gravitational field exists around any material object (the source object of a field) and acts as an attraction towards this source object, experienced by any other material object (probe object) positioned in this field.
As described in the "Gravity, Weight" chapter of "Mechanics" part of this course, the magnitude of the gravitational force F is proportional to a product of masses of a source object and a probe object, M and m, and it is inversely proportional to a square of a distance r between these objects:
F = G·M·m /r²
where G - a constant of proportionality, since the units of force (N - newtons) have been defined already, and we want to measure the gravitational force in the same units as any other force.

The direction of the gravitational force acting on a probe object is towards the source object.

Let's return to our example of a comet flying not far from the Sun and, being attracted to the Sun, changing its trajectory. Obviously, to change the trajectory, some energy must be spent. So, we conclude that gravitational field has certain amount of energy at each point that it spends by applying the force onto a probe object.

Therefore, an expression EP=m·V(r) represents potential energy of a probe object of mass m at a distance r from a source of a gravitational field with gravitational potential V(r).

Posted by Unizor at 4:52 AM No comments: