This lecture is about a different type of waves.
These waves are still mechanical oscillations in a sense that they are movements of objects with some periodicity, but the objects are not exactly the same as we studied in a previous chapter "Mechanical Oscillations".
The objects we discuss in this lecture are molecules of some substance, like air or water, or steel.

The word medium we use in a sense of "a substance regarded as the means of transmission of a force or effect", as defined in Merriam-Webster dictionary. Examples are air, water, wood, glass etc.
Basically, any substance can be a medium and transmit an oscillation from its source to some destination. The only thing that cannot be a medium in this sense is an absolute vacuum void of any force fields.

As an example of oscillation of a medium, consider a ringing bell after we strike it with a hammer.
For quite some time molecules inside this bell are oscillating, forcing to oscillate air around a bell as well, so we hear the sound.

Let's create a simplified model of this process.
First of all, we will research only a one-dimensional case.
As an example, consider a propagation of oscillation inside a thin metal rod after we strike one of its ends with a hammer.

Further consider that each molecule of a metal this thin rod is made of is connected by spring-like inter-molecular links with its left and right neighbors along a rod. If one molecule is oscillates, it will squeeze one link that attaches it to one neighboring molecule and stretches the other link, thus engaging its neighbors in oscillation.
In our one-dimensional case this model looks like this

where letter m indicates a molecule with its mass, while letter k indicates an elasticity of a weightless spring-like connection between molecules.

The above model of propagation of oscillation, while not perfect, allows to better understand the mechanism of waves in medium.

Finally, we simplify the problem even further by limiting the length of a rod to only two molecules, thus making the following model.

In this model two identical molecules, #1 (left on the picture) and #2 (right), of mass m each are linked by identical weightless springs of length L and elasticity k among themselves and to the edges of a thin rod.
Assume that initially the left end of the rod is at the origin of X-axis, the molecule #1 is at distance L from it along the X-axis, the molecule #2 is at distance L from the first further along the X-axis and the right end of a rod is by L further down. This assumption means that initially all springs are in neutral position.
Also assume that the molecule #1 (left on the picture above) has an initial speed v, modeling a strike of a hammer on the bell.

The forces of the middle spring acting on molecules #1 and #2 depend on the difference in displacements of these molecules from their neutral position.

If Δ(t) is negative, the middle spring is stretched and its left end (towards molecule #1) pulls molecule #1 to the right (in positive direction), which makes F12(t) positive, while its right end pulls to the left (in negative direction) molecule #2, making F21(t) negative.

Let's approach this system of equations in a more "mathematical" way, using vectors and matrices (you can refer to "Math 4 Teens" course on UNIZOR.COM, which explains the concepts of a vector and a matrix and operations with them).

Now our system of two differential equations can be represented as one equation with vector argument
X"(t) + Ω·X(t) = 0
where X"(t) signifies a vector of second derivatives of each component of a vector X(t) and 0 signifies a null-vector.
An operation · (dot) in this equation signifies a multiplication of a matrix Ω by a vector X(t).

Compare it with an equation for a periodic movement we discussed in the very first lecture on Waves
x"(t) + (k/m)·x(t) = 0
where later on we assigned ω²=k/m.
We will try to solve a vector equation the same way we solved this similar equation in a one-dimensional case.
This is a subject of the next lecture.

Posted by Unizor at 9:32 AM No comments:

This lecture continues analysis of forced oscillations for a specific case, when the angular frequency of external periodic force equals to an inherent natural frequency of an object on a spring without any external forces.

Let us remind the introductory material from the previous lecture.

Oscillation is forced, when some periodic force is applied to an object that can potentially oscillate.

A subject of our analysis will be an object on a spring with no other forces acting on it except one external force that we assume is periodical.

As we know, in the absence of external force the differential equation describing the displacement x(t) from a neutral position of an object of mass m on a spring of elasticity k follows from the Hooke's Law and the Newton's Second Law
m·x"(t) = −k·x(t)
or
m·x"(t) + k·x(t) = 0
with a general solution
x(t) = A·cos(ω0·t) + B·sin(ω0·t)
where
A and B are any constants;
ω0 = √k/m is an inherent natural angular frequency of oscillation of this particular object on this particular spring.

The equation above is homogeneous because, together with any its solution x(t), the function C·x(t) will be a solution as well.

Consider a model of forced oscillation of an object on a spring with a periodic external force F(t)=F0·cos(ω·t).

The function on the right of this equation makes this equation non-homogeneous.
Our task is to analyze the movement of an object on a spring in the presence of a periodic external function, as described by the above differential equations and some initial conditions.

In the previous lecture, where we considered an angular frequency of external force ω to be different from the inherent natural frequency of oscillation of an object on a spring ω0, we were looking for a partial solution in a form xp(t)=C·cos(ω·t) and found such a coefficient C that the equation is satisfied:
C = F0 / [m·(ω0²−ω²)]
But, if ω=ω0=√k/m, we cannot use this method (since denominator becomes zero) and have to invent something new.

The usual recommendation in a case like this is to still use trigonometric functions, but with some simple function as a multiplier.
Let's try the following function:
xp(t) = Q·t·sin(ω·t)

Canceling positive and negative terms that are equal by absolute value, got the following equation with the proposed solution
2Q·ω·cos(ω·t) =
= (F0/m)·cos(ω·t)
from which
Q = F0/(2m·ω)
The partial solution to our non-homogeneous differential equation is
xp(t) = F0·t·sin(ω·t)/(2m·ω)

Now the general solution to our differential equation that describes forced oscillation looks like
x(t)=F0·t·sin(ω·t)/(2m·ω) +
+ D·cos(ω·t−φ)
where
F0 is an amplitude of a periodic external force;
m - mass of an object on a spring;
k - elasticity of a spring;
ω=√k/m is an inherent natural angular frequency of oscillation of this particular object on this particular spring and the angular frequency of external periodic force;
t is time;
D and φ parameters are determined by initial conditions for x(0) and x'(0).

Let's represent it graphically for some specific case of initial conditions and parameters. 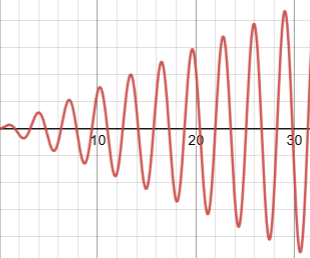 Posted by Unizor at 8:16 PM No comments: