Unizor - Derivatives - Differential Along a Curve

Differential Along the Curve

We will discuss curves on a plane defined parametrically as a pair of functions {x(t), y(t)}, where t is a parameter taking real values in some finite interval [a,b], while x(t) and y(t) are coordinates of points on a curve.
We assume that both coordinate functions are smooth functions of parameter t.

Our main task is to discuss the length that a point covers when it moves along this curve as parameter t changes its value within its domain.

Traditional approach to this task is to approximate the curve with a series of connected segments as presented on this picture. 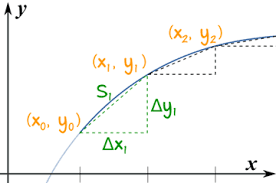 During the time from tn to tn+1a particle moves along the curve from point {x(tn), y(tn)} to {x(tn+1), y(t+11)}.
If all Δtn+1=tn+1−tn are sufficiently small, the length along the curve between each pair of beginning and ending points can be approximated by the length of straight segment between them. The smaller the time intervals - the better is our approximation.

So, the formula for infinitesimal increment of the length of a curve, called a differential along the curve, looks like this:
ds(t) = √[dx(t)]²+[dy(t)]²

In Physics of motion we know a concept of velocity - a vector with absolute value of a ratio between distance and time (speed), directed towards the direction of motion.

If our motion is not straight forward, but goes along some curve, the direction of motion at any time is along the tangential line to this curve.
If our motion is not constant in speed, we can talk about a very small interval of time during which we can assume the speed changes just a little and calculate an average speed during this time.

Derivative x'(t) represents the rate of change of X-coordinate of a particle moving along the curve, derivative y'(t) is the same for Y-coordinate.
What the formula for speed along a curve shows is that velocity of an object moving along a curve, as a vector, can be represented as a sum of two vectors - X-component, a vector directed along the X-axis having value Vx(t)=x(t)=x'(t)and Y-component, a vector directed along the Y-axis having value Vy(t)=y'(t).