Molecules are comprised from atoms, which have completely different characteristics. There are just a little more than a hundred different atoms, from their compositions all molecules are built.

Each atom, according to a classical model that we will use when talking about electricity, consists of a nucleus, where certain number of protons and neutrons are bundled together, and electrons that rotate on different orbits around a nucleus.

In a normal state atoms have equal number of protons and electrons, thus are electrically neutral, which implies that the amount of electric charge in one proton and one electron are equal, though opposite in "sign". Obviously, our designation of "positive" and "negative" is just for a convenience of description and ease of calculations.

Electric force is really strong. As an example, let us consider two small cubes of iron of 1 cm³ each positioned at the distance of 1 meter from each other.
There are 8.4·1022 atoms in each cube. Each atom contains 26 protons, 30 neutrons and 26 electrons.
If we magically strip all atoms in one cube of iron of all their electrons and transfer them to another cube, the one with deficiency of electrons will be positively charged and the one with excess electrons will be negatively charged. So, they will attract each other.
The total number of excess electrons in one cube, which is equal to the total number of deficient electrons in another one is
26·8.4·1022 ≅ 2.2·1024
The distance between them is 1 meter. According to Coulomb Law, that we will study later, the force of attraction between these two small cubes of iron will be, approximately
F = 1.11·1021 N (newtons)
THIS IS HUGE!
Just as a comparison, the force of gravity that keeps the planet Mars on its orbit around the Sun is equal to 1.6·1021 N, which is quite comparable.
It also shows how much stronger electrical forces are, compared to gravitational.

Fortunately, we never have to deal with such strong forces, all atoms that comprise an object are never stripped of all their electrons.

An electroscope is a device that can demonstrate the excess or deficiency of electrons, that is whether an object is electrically charged. 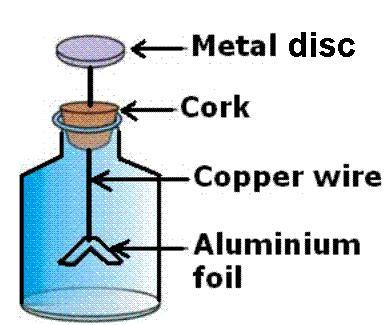 Initially, the electroscope is electrically neutral and aluminum foils are in vertical position, as there is no electrical force between them.
If electrically charged object touched the metal disc of an initially neutral electroscope, excess or deficiency of electrons in an object will be shared with metal disc and, further, with aluminum foils. This will negatively or positively charge both aluminum foils, and they will split apart because the same electrical charge (positive or negative) repulse objects (aluminum foils in this case).
With proper calibration this effect can be used to measure the amount of electricity by the angle of deviation of aluminum foils from vertical, as more electrons are in excess or deficiency - the stronger the repulsive force will be between the foils, and the greater angle of deviation of their position from the vertical will be.
Posted by Unizor at 7:44 PM