In talking about electricity we will often use examples with heat distribution.
Consider a house with a heating system. 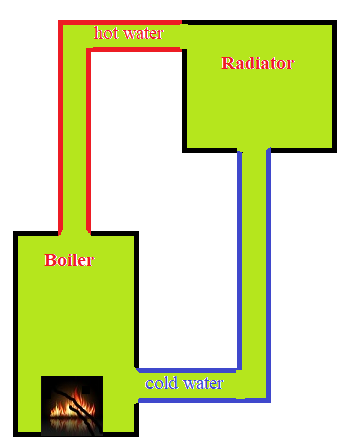 A radiator, connected to a boiler by pipes, is installed in a room. The boiler heats up the water that goes from its outgoing pipe to an intake of a radiator, where it releases its heat, goes out of a radiator and comes back to a boiler intake pipe. There it is heated again and a circle continues.

The boiler produces energy (heat), pipes transport it to a radiator, where it's released to a room.

With an electric circuit that contains some source of electric energy (battery, generator etc.) and a resistor the process is very similar.
Inside a source of energy some electrons are separated from their nuclei and sent to one terminal, which becomes negatively charged, while those atoms that lost some of their electrons are sent to the other terminal, which becomes positively charged.
This process generates potential energy, since positive and negative charges are attracted to each other, and a battery separates them and does not let them to connect back within it.

The potential energy of positive and negative charges in presence of a circuit is transformed into kinetic energy of electrons moving along a circuit, partially spending its energy on dragging through atoms of resistor and ending up on the positive terminal of the battery.
A simple mechanical equivalent is the process of a child climbing up a ladder to the top of a slide, thus generating a potential energy and, instead of going back down the stairs, slides down a slope, partially spending kinetic energy to friction.

Consider first the situation with two boilers connected in a series. That is, outgoing pipe with hot water from one boiler goes to another boiler, which adds more heat to the water before it's sent from it to a radiator, from which the water goes back to the intake of the first radiator.

Obviously, the water, being heated twice, will be more hot than heated only once. So, the amount of water going to a radiator will be the same as with one boiler, but its temperature will be greater.

Similar process occurs when two batteries are connected in a series as follows:

Therefore, batteries in a series increase the difference of potential (voltage) between their free ends.
For example, if a single AA battery provides 1.5V on its terminals, two such batteries connected in a series provide 3V.

This type of connection in a series is used when we connect 2 standard AA batteries to power TV remote control that requires 3V to work properly. Or we connect 6 such batteries in a series to get 9V difference in potentials to power a toy car.

So, all batteries connected in a series work at their usual capacity, last exactly as if they work separately, just the voltage is increased.

Conclusion: The voltage of an assembly of several sources of electric power connected in series is a sum of all individual voltages of its components.

Again, let's start with boiler analogy. Consider two identical boilers connected parallel to each other, that is outgoing pipes with hot water from both of them are joined and go to a radiator, where the hot water releases its heat, cools down, and the cold water on its way out is split into both intakes of two boilers.

Under these conditions the temperature of the hot water is the same as if only one boiler worked. At the same time, each boiler can work with half of its power because the total amount of hot water needed to heat the room is now split into two boilers.

Now consider two identical batteries connected parallel to each other. 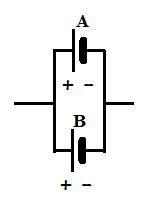 The difference in electric potential (voltage) on the free ends of this assembly is the same as the voltage on the ends of each battery. So, the voltage in parallel connection remains the same.

At the same time the electrons needed by electric power consumer (a lamp, a refrigerator etc.) connected into a circuit with these batteries will consume half of needed electrons from one battery and another half from another.
So, the batteries in parallel connection share the burden and will work longer. Actually, about twice as long in this configuration than if only one battery supplied the power to a device that consumes the electricity.

For example, if a single AA battery provides 1.5V on its terminals and works for 1 hour supplying electricity to a small lamp, two such batteries connected in parallel provide the same 1.5V for this lamp, but will last about 2 hours.
Posted by Unizor at 8:48 PM