For the purpose of this lecture it's important to be familiar with the concept of a self-induction explained in "Electromagnetism - Self-Induction" chapter of this course.

In this lecture we will discuss the AC circuit that contains an inductor - a wire wound in a reel or a solenoid, thus making multiple loops, schematically presented on the following picture. 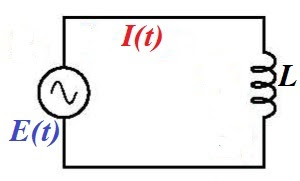 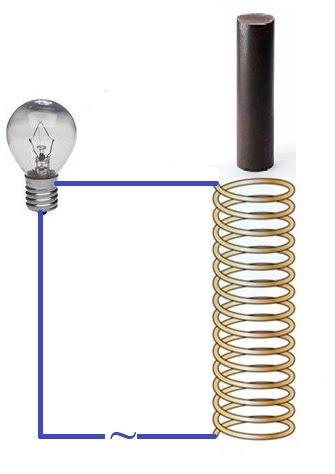 Here the AC circuit includes a lamp, an inductor in a shape of a solenoid and an iron rod fit to be inserted into a solenoid.

This experiment demonstrates that inductors in the AC circuit produce
effect similar to resistors, and the more "inductive" the inductor - the
more resistance can be observed in a circuit.

The theory behind this is explained in this lecture.

The cause of this resistance is self-induction. This concept was
explained earlier in this course and its essence is that variable
magnetic field flux, going through a wire loop, creates electromotive
force (EMF) directed against the original EMF that drives electric
current through a loop.

where L is a coefficient of proportionality that depends
on physical properties of the inductor (number of loop in a reel, type
of its core etc.) called inductance of the inductor.

If the current is alternating as

the flux will be

According to Faraday's Law, self-induction EMF Ei
is equal in magnitude to a rate of change of magnetic flux and opposite
in sign (see chapter "Electromagnetism - "Self-Induction" in this
course)

The unit of measurement of inductance is henry (H) with 1H being an inductance of an inductor that generates 1V electromotive force, if the rate of change of current is 1A/sec.

An expression XL=L·ω in the above formula for Ei is called inductive reactance. It plays the same role for an inductor as resistance for resistors.

The units of the inductive reactance is Ohm (Ω) because

Using this concept of inductive reactance XL of an inductor, the time dependent induced EMF is

which for inductors in AC circuit is an analogue of the Ohm's Law for resistors.

What's most important in the formula