Notes to a video lecture on http://www.unizor.com

The grid is an extremely important solution to most problems with electric power interruption due to different technical issues at power plants that generate electricity.

Consider a simple analogy of distributing water to apartments in a large building from a tank on a roof.
If you have one tank, and it needs repair or cleaning, the water to all apartments must be shut off while the work performed.
If, however, you have two water tanks on the roof both connected to a common distribution pipe, from which the water is flowing to all apartments, we can just close the connection of the tank to be cleaned to a distribution pipe, leaving another tank operational and water supply to apartments uninterrupted.

Obviously, with electricity it's much more complex than with water supply.

Let's enumerate problem we have to resolve when connecting different electric generators to a common power distribution system.

Let's connect two batteries generating direct current parallel to each other and power up a lamp. 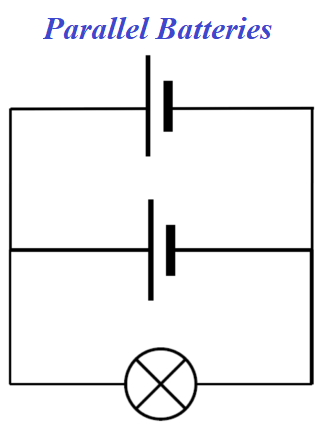 The proper connection requires the same polarity (positive pole of one battery is connected to positive pole of another, negative - to negative) and the same voltage generated by these batteries. Only then there will be no electric current between the batteries, only from a battery to a device consuming the electricity (a lamp in this case).
These two conditions, similar polarity and equal voltage, are necessary and sufficient conditions to successfully connect two batteries in parallel. The overall energy capacity of these two batteries will be twice as big. They will last twice as long on the same load (one lamp) or they can double the load (have two lamps parallel to each other) and serve the same time as one battery on a single load.

Analogously, two generators of alternating current (AC) must have the same output voltage, if connected in parallel. Otherwise, there will be an unnecessary electric current between them, which diminishes their usefulness.

But for AC generators there are more characteristic parameters than just a voltage. Voltage varies as a sinusoid with time and is characterized by amplitude, frequency and phase.

All three parameters must be the same for a proper parallel connection of two generators. Their output voltages, as functions of time, must coincide exactly to each other. And this is a big challenge to build a grid with many different generators, each contributing their part in overall power supply. 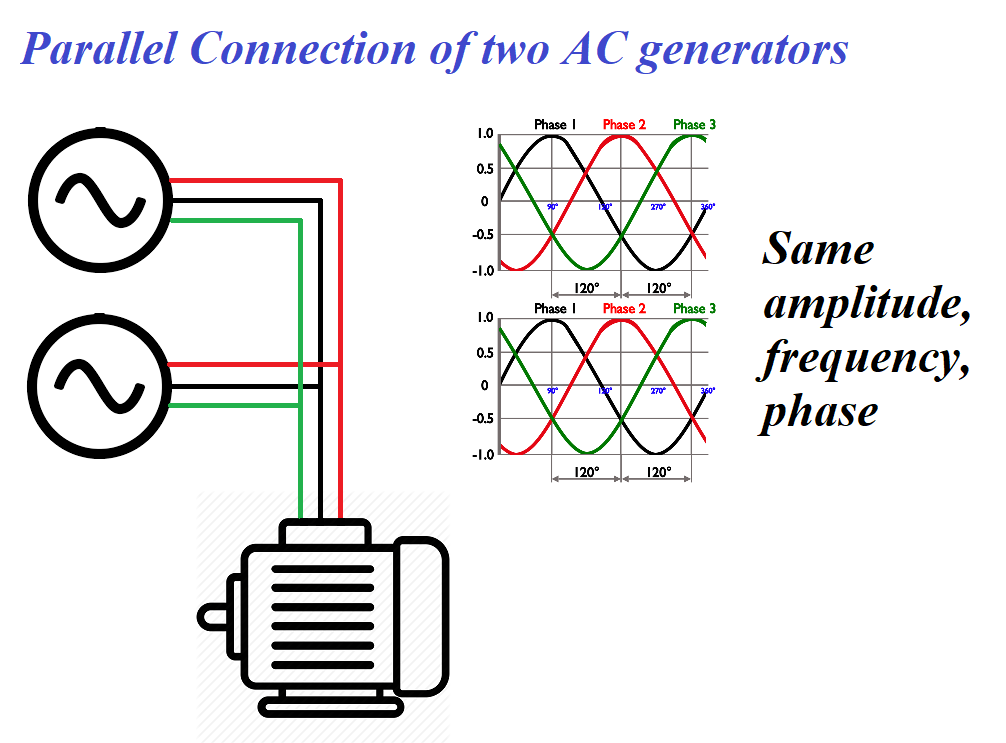 The above considerations dictate strict restrictions on how any new source of electricity, like a new power plant or a new solar panel are hooked to a grid.

First of all, the output of a generator at the point of connection to a grid must be alternating. Solar panels, for example, produce direct current, so, before connecting to a grid, the DC electricity must be converted to AC. Special devices called inverters provide this type of conversion, assuring the frequency of voltage oscillation to be that of the grid.

Then, depending on a point of connection to a grid, the output voltage must be equalized with that of the grid at the connection point. This can be done with proper transformers.

Finally, we have to adjust the phase to synchronize the output of the generator with the phase of a grid. This can be achieve by adjusting the speed of a generator's rotor while monitoring the phase difference on a special sensor until proper synchronization is achieved.

Overall, the connection to a grid is a sophisticated process that requires special devices, tools, instrumentation and care.
There are many controls that monitor, adjust and maintain the regime of work of a grid. In many ways it's automated, computer controlled and reliable. However, human errors do happen and some of them result in significant distortions of power supply to large areas and affecting a lot of people. As an example, the 2003 blackout in Ohio resulted in power loss across Eastern United States and even some areas in Canada.