Let's implement the logical NOT operation in an electronic circuit using a plain switch.
Consider the following schema. 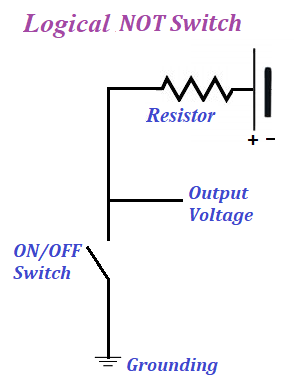 When ON/OFF switch is in OFF position, there is no current in a circuit and the potential at the output point will be positive as on the corresponding battery terminal.

If we change the switch to ON position, there will be an electric current flow between the ground and the positive battery terminal, the potential at the output point will be the same as that of the grounding, that is zero.

With this in mind, all we have to change in this circuit to make it purely electronic is to implement the switch electronically.
We can use a triode for this purpose with grounded cathode.

As we know, the positive potential on the grid of a triode enhances the attraction of an anode for an electron cloud around a grounded but heated cathode, thereby opening the movement of electrons from cathode to anode. Since cathode is grounded, all electrons that moved to an anode will be compensated from the ground, and there will be a steady flow of electrons from cathode to anode, which is equivalent to a switch to be in ON position.

At the same time, grounded (zero potential) grid does not help the electrons of the grounded cathode to reach the positive anode, there will be very weak, if any, electric current between anode and cathode, which with proper parameters of the components of a circuit can be brought practically to zero, which is equivalent to a switch to be in OFF position.

This brings us to the following circuit that implements the logical NOT operation (inverter). 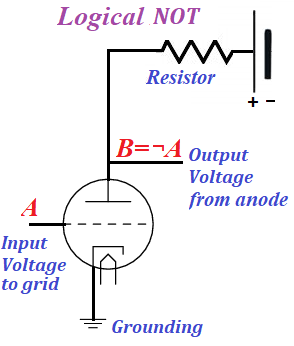 This is a very primitive implementation, only for educational purposes. The real inverters are more complex and usually implemented using transistors, which we will discuss later in the course.