According to the orbital model of an atom, electrons are rotating around a nucleus on certain orbits, each orbit representing certain energy level possessed by all electrons on it. There are certain principles related to quantum mechanics and wave theory of elementary particles that prescribe electrons to rotate only on certain distinct radiuses around a nucleus. The reason for this we will discuss when addressing the atomic structure in more details in a corresponding part of this course.

On every distinct radius the rotating electrons experience the attraction of the protons in a nucleus and repelling of other electrons rotating on the same orbit (on the same radius from a nucleus). Obviously, for every distinct radius of an orbit there is a maximum number of electrons that can rotate around a nucleus without pushing each other so strongly that one of them must jump out of the orbit to, most likely, the orbit of a larger radius or even outside of the atom.

Calculations based on principles of quantum mechanics show that this maximum number for the first (closest to a nucleus) orbit is 2, for the next - 8, next - 18 etc. The formula N=2n² where n is the orbit number and N is the maximum number of electrons on this orbit describes this in many (but not all) cases.

The atom of every element has certain number of protons in a nucleus and the same number of electrons rotating on different orbits. These orbits are packed with electrons not to exceed their maximum capacity.

In a simplified model of an atom of carbon C12 with 6 protons and 6 neutrons in a nucleus there are 6 electrons on two orbits: 2 on the closest to a nucleus and 4 on the next one. In a simplified model of an atom of silicon Si28 with 14 protons and 14 neutrons in a nucleus there are 14 electrons on three orbits: 2 on the closest to a nucleus, 8 on the next one and 4 on the outer most orbit. In a simplified model of an atom of titanium Ti48 with 22 protons and 26 neutrons in a nucleus there are 22 electrons on four orbits with, correspondingly, 2, 8, 10 and 2 electrons on them. Here is an example of a molecule of methane that consists of one atom of carbon C12 (two orbits with 2 electrons on an inner orbit, not shown on a picture, and 4 valence electrons) and four atoms of hydrogen H1 (single orbit with 1 electron on it). These covalent bonds between atoms are the basis for certain different atoms to combine into molecules or the same atoms to form a crystalline structure. 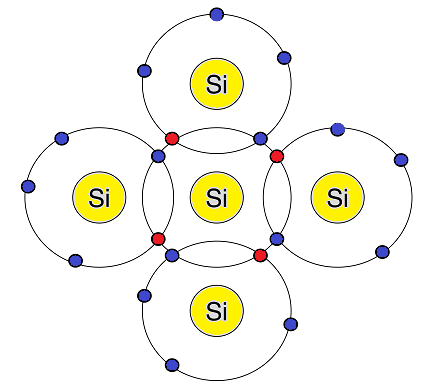