Another example might be a weightless horizontal rod with two identical weights at its opposite ends hanging on a vertical steel wire attached to a rod's midpoint. 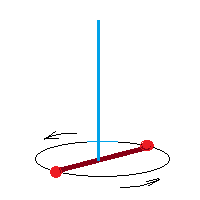 If we wind up the horizontal rod, as shown on the picture, and let it go, it will create a tension in the twisted wire that will start untwisting, returning the rod into its original position, then winding in an opposite direction etc., thus oscillating rotationally.

Recall the concept of a torque for rotational movement
τ = R·F
In a simple case of a force acting perpendicularly to a radius (the only case we will consider) the above can be interpreted just as a multiplication. In a more general case, assuming both force and radius are vectors, the above represents a vector product of these vectors, making a torque also a vector.

While the tension force of a twisted steel wire F1 might be significant, it acts on a very small radius of a wire r, so the force F2, acting on each of two weights on opposite sides of a rod of radius R and having the same torque τ, is proportionally weaker
τ = r·F1 = R·F2
from which follows
F1 /F2 = R /r
and
F2 = (r/R)·F1 = τ /R

Dynamics of reciprocating (back and forth) movement are expressed in terms of inertial mass m, force F and acceleration a by the Second Newton's Law
F = m·a

In case of a rotational movement with a radius of rotation R the dynamics are expressed in terms of moment of inertia I=m·R², torque τ=R·F and angular acceleration α=a/R by the rotational equivalent of the Second Newton's Law
τ = I·α

There is a rotational equivalent of a Hooke's Law. It relates a torque τ and an angular displacement φ from a neutral (untwisted) position
τ = −k·φ

The differential equation above is of the same type as for an oscillations of a weight on a spring discussed in the previous lecture. The only difference is that, instead of a mass of an object m we use moment of inertia I=m·R².

Since I=m·R², the period is greater (and the frequency is smaller) when objects are more massive and on a greater distance from a center of a rod, where the wire is attached.

Notice that a period and a frequency of these oscillations are not dependent on initial angle of turning the rod φ(0)=γ. This parameter γ defines only the amplitude of oscillations, but not their period and frequency.

This is an important factor used, for example, in watch making with a balance wheel oscillating based on its physical characteristics and an elasticity of a spiral spring.
No matter how hard you wind a spring (or how weak it becomes after it worked for awhile), a balance wheel will maintain the same period and frequency of its oscillations.