Pressure waves are longitudinal oscillations of molecules of some medium caused by mechanical vibration of a source and propagated through medium.

Let's consider a simple device - a long cylinder of relatively small diameter with air and a piston in it.

Initially, a piston is in the top position, and air molecules are chaotically moving inside, bumping into each other, hitting the walls of a cylinder and a piston, thus creating certain pressure on them.
Their "chaotic" behavior just means that they are moving in all directions with equal probabilities.

Then in a short motion we quickly push a piston, abruptly reducing the volume of a cylinder.

If we did it slowly, the molecules of air would have the time to relatively evenly redistribute inside a smaller volume of a cylinder. This, according to the Boyle's Law, would cause the pressure inside a cylinder to evenly increase at every point inside.

If, however, we did it in a short quick motion, the pressure immediately under a piston will rise, while farther from a piston will not, simply because air molecules in immediate vicinity of a piston will not have time to evenly redistribute throughout the whole cylinder's new (smaller) volume.

Statistically, the probability of moving in a direction away from a moving piston will be higher for those molecules immediately under it, which will create extra pressure on their neighbors down the cylinder.

After transferring part of their kinetic energy to neighboring molecules down a cylinder, those molecules immediately under a piston will gradually restore their chaotic movement to all directions with equal probabilities, but their neighbors, receiving extra push from above, will have their chaotic movement changed in a way that they will move down a cylinder with greater probability than up.

This process of transferring kinetic energy continues down a cylinder, from one layer of air molecules to another, thus creating a flat wave of area of higher pressure.

The speed of this wave moving down a cylinder depends on many factors, mostly it depends on density of air molecules inside a cylinder and, obviously, certain characteristics of molecules themselves and how they interact. To a lesser extent it depends on a speed of moving piston.

So, lower pressure, formed under a piston immediately after it stopped its downward motion will travel down the cylinder. It will create a new flat wave of lower pressure that follows the high.

Now consider that we quickly moved a piston up. During the movement of a piston up the cylinder the air pressure immediately under it will be smaller than further down a cylinder, because air molecules need some time to fill newly increased volume of space.

Statistically, the probability of moving in a direction towards a moving piston will be higher for those molecules immediately under it, so they will start moving upwards, following the cylinder movement, as if a piston pulled them up.
They will fill the area of a lower pressure under the piston, thereby creating a lower pressure below, so the area of lower pressure will move down a cylinder as a wave.

So, higher pressure, formed under a piston immediately after it stopped its upward motion will travel down the cylinder. It will create a new flat wave of higher pressure that follows the low pressure wave.

Finally, consider quick reciprocal movement of a piston back and forth. If this movement is faster than normal time for air molecules to evenly distribute within the available volume, zones of higher and lower pressure will be produced by a piston and will propagate towards an opposite side of a cylinder. These are pressure waves. 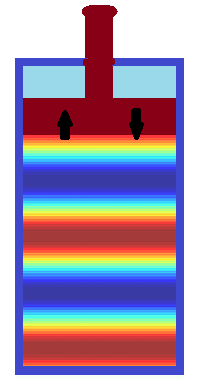 Let's introduce some wave characteristics, assuming that the piston in our experiment is periodically and reciprocally moving back and forth significantly faster than air molecules inside a cylinder can evenly distribute.
We also assume that a cylinder is long enough (strictly speaking, of infinite length, that is, bottomless), so we don't have to worry about a reflection wave from its bottom that superimposes on the primary wave initiated by a piston.

These are conditions when waves of high and lower pressure are following each other with constant frequency and with constant distance between the peaks.
The first parameter that we introduce to characterize the waves is the wave length, which is a distance from one peak of pressure to the next one. We can talk about distance as the length between the peaks, that is wave length λ, and the time that passes between one wave crest passes a particular point and the next one, which is wave period T .

From these two parameters of waves we derive wave speed v=λ/T and frequency ν=1/T.

Let's represent graphically the waves in a medium in terms of pressure p as a function of time t and distance d from a piston, the source of oscillation.

Let's limit the oscillations to only one period (one back and forth movement of a piston) and assume that the time of a period T is very small, so we can examine the behavior of a single wave.

Let's examine the air in the area immediately under a piston - a very thin layer of molecules having initial volume V0.
We can assume that within this very thin layer the pressure of air during piston's movement is the same and only depends on its volume, which, in turn, is a function of the position of a piston. Farther down a cylinder the situation will be different since areas of high and low pressure will not travel immediately, but with some speed that depends on the property of air.

According to Boyle's Law, air pressure p(t) in the thin layer under a piston that we consider is inversely proportional to its volume.
Therefore,
p(t) = C / V(t)
where
C is some constant.

Firstly, it's periodic because the numerator is a constant and the denominator is a periodic function.
Secondly, it oscillates between its maximum, when the denominator at minimum (when sin(ω·t)=−1)
pmax = C / [V0 − B]

So, we do obtain oscillations of the pressure in the area immediately adjacent to a piston, just not exactly harmonic oscillations.

As we see, the same pressure wave goes through points on any distance from the initial position of a piston, but comes there later in time.
And, the farther the point is from a piston - the later the pressure wave comes to it.